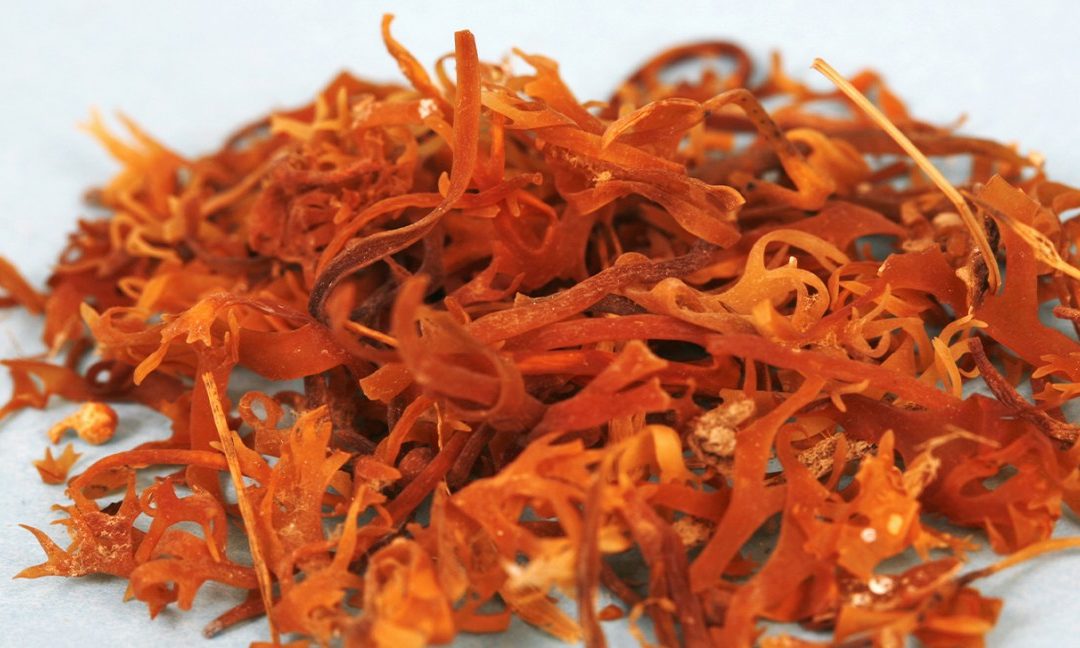 Sea Moss Benefits and How to Use it in Your Everyday Life?

In this article, you will learn about sea moss benefits in detail. But before talking about the benefits, it’s necessary to understand what sea moss is? Sea moss, commonly known as red seaweed or Irish moss, grows in inlets and tidepools. It is a type of algae that plays a vital role in many industries. Just like other edible sea plants, sea moss is also edible seaweed. It grows in several colors, including yellow, purple, green, gold, black, red. The most common moss is Irish moss that is gold in color and grows in warmer areas.

It is commonly harvested in the Caribbean to extract a jelly-like substance known as carrageenan from sea moss. A unique carbohydrate is known as “gelatinous” is derived from carrageenan used in cosmetics or baked goods. You can eat sea moss on its own and can also add it to your stews or soups to increase its thickness.

Ever since Kim Kardashian’s video of drinking sea moss smoothies went viral, the healthy eating community is bursting on the internet claiming Irish moss benefits. They believe that from the skin to immunity, this Irish moss is helpful in every context. To learn how many of these benefits are just hearsay or based on science, you need to scroll down and read the upcoming points.

Irish moss is loaded with minerals and vitamins. It consists of 10% dry-weight protein and 15% mineral matter. It is rich in iodine and sulfur. Being naturally low in fats, sugar, and calories, they have a deficient plant protein.

Nutritional value of sea moss: Irish moss is a vegan, gluten-free source of several nutrients. The most common nutrients that are included in Irish moss are:

The nutrients per serving in sea moss include:

In 2 tablespoons of sea moss, there are;

What are sea moss health benefits?

People who have been using sea moss for years believe that it has several health
benefits. Sea Moss contains 91 of the 102 minerals our bodies need, like zinc, iodine,
iron, and more! Science, on the other hand, is digging deep to understand better the use
of sea moss.

The most common benefits of sea moss that have been known widely are:

Sea moss is rich in iodine and helps treat the thyroid. The thyroid is a gland that secretes hormones helpful in controlling vital functions of your body. When the thyroid gland doesn’t work correctly, it affects the whole process of your body. Iodine helps your thyroid produce the vital hormones that control your nerves, metabolism, and bone growth. So, if you are suffering from thyroid disease, you can take help from sea moss that is rich in iodine and will promote healthy hormone functioning.

Sea moss benefits in reducing the risk of cancer:

Several carotenoids, including fucoxanthin that is found in Irish moss, act as antioxidants. To help fight free radicals, antioxidants are helpful. The uncontrolled free radicals damage your cells badly and cause them to grow dangerously. The damaged bones can become cancerous if they go untreated. You can reduce your risk of developing cancer by eating seaweed, especially sea moss.

Do you know why Irish moss has a red-brown color? Well, a carotenoid known as fucoxanthin present in moss gives it this dark shade color. Several studies have shown that this carotenoid has significant benefits, including lowering blood sugar levels. It helps the body respond effectively to insulin, which means that your body will control its blood sugar even with less work. Moss benefits for diabetic people are that they can save themselves from crashes or blood sugar spikes by eating Irish moss.

Studies have shown that people who want to boost their metabolism should use sea moss. It helps to save the body from contracting salmonella. Another study has shown that a significant sea moss benefit is that it prevents the growth of a bacteria called S.Enteritidis that causes salmonella in humans. Still, studies are going on to check whether it is true that moss contains salmonella.

Seaweeds might support a person in reducing weight. A study was conducted on a group of adults. Seventy-eight adults were given 1000mg of sea moss daily. The results have shown that the students given a dose of seaweed had a significant weight loss than the placebo group. A special compound named fucoxanthin shows promising results in breaking and metabolizing fats. This weight loss varies with the type of seaweed that you are using.

The neuroprotective effects of sea moss

The antioxidants properties in algae help in fighting against neurodegenerative
diseases. It allows patients with degenerative diseases like Parkinson’s Disease. All these fantastic Irish moss benefits must have been unknown to you till now, as this seaweed is under study.

Other sea moss benefits include:

● It supports fertility
● Supports immune system
● It supports the muscles by recovering energy
● It supports gut health
● Helps in weight loss
● Sea Moss contains 91 of the 102 minerals our bodies need, like zinc, iodine,
iron, and more!
● It is rich in amino acids, vitamin C, vitamin A, omega-3 fatty acids,
antioxidants, and minerals.
● It helps reduce inflammation
● It helps your body in getting rid of excess mucus (which is excellent,
especially when you have a cold!)
● It is perfect for respiratory health
● It helps get rid of harmful bacteria in the gut and increases digestive health
● When applied to the skin, it helps improve eczema, psoriasis, and acne
breakouts

How to use sea moss?

How to make Sea Moss Gel?

To prepare sea moss gel, you have to soak raw sea moss overnight in water. In the morning, rinse it thoroughly and blend it with water until it smoothens. You can transfer this gel to an airtight container and store it in the refrigerator.

Healthy Herbs sea moss gel mix offers an ancient tradition of healing, nourishing, and cleansing the body by promoting cellular regeneration. It is also naturally packed with selenium, manganese, vitamins B-complex AND vitamins A, C, E, G, and K, and more giving you more energy and a stronger immune system.

These delicious gummy are much easier to get your daily sea moss, bladderwrack, burdock root, and apple cider vinegar. Irish moss alone contains 92 of the 102 minerals that our bodies need, along with Vitamins A, B, C, D, E, and K (Vitamin ADK). You need one gummy a day!

Customers say; These sea moss gummies taste so good I have to remind myself only to eat 2 a day. They taste and feel just like a gummy bear. I have finished my first bottle, and I believe they are helping my immune system and help my weight fluctuate too much. I have ordered my 2nd bottle and might join the subscription and save for this product.

A famous drink, also known as a love potion for men, is made with nutmeg, vanilla, non-dairy milk, and cinnamon blend. It is a vegan, super tasty drink, and yes, it’s gluten-free.

The best way to enjoy sea moss is by making a sea moss smoothie. Sea moss is light in taste but can taste a little fishy and may smell like the ocean. So that you can add fruits and vegetables along with it too. The chocolate raspberry smoothie is the best. This smoothie will be loaded with antioxidants, amino acids, and omega-3 fatty acids.

Sea moss gel is also known as vegan gelatin. It can be used in thickening foods like stews and soups. You can add Irish moss into a blueberry or homemade apple jam too. It will enhance the taste, but sea moss benefits will amaze you with their several properties.

Suppose you want to give your skin an extra glow and make it acne-free. You can make a mask of sea moss. You can add two tbs of Irish moss in 2 tbs of turmeric powder. You can apply the mask 2-3 times a week. It will help you moisture and heal the facial skin.

What else can you cook with sea moss?

Suppose you are a big fan of sea moss and want to eat it in one way or another. Then you can make sea moss desserts, drinks, stews, soups, and sauces. You can also use it as a binding agent by replacing eggs with Irish moss.

Sea moss benefits are hundreds and millions that scientists aren’t yet aware of. If you are badly suffering from any degenerative disease or heart disease, you can help cure it to a great extent with regular Irish moss. It also helps to maintain healthy, glowing skin by healing the ruptured areas. My experience with sea moss is excellent as it has helped me reduce weight to a great extent. I hope you guys too benefit from the sea moss.